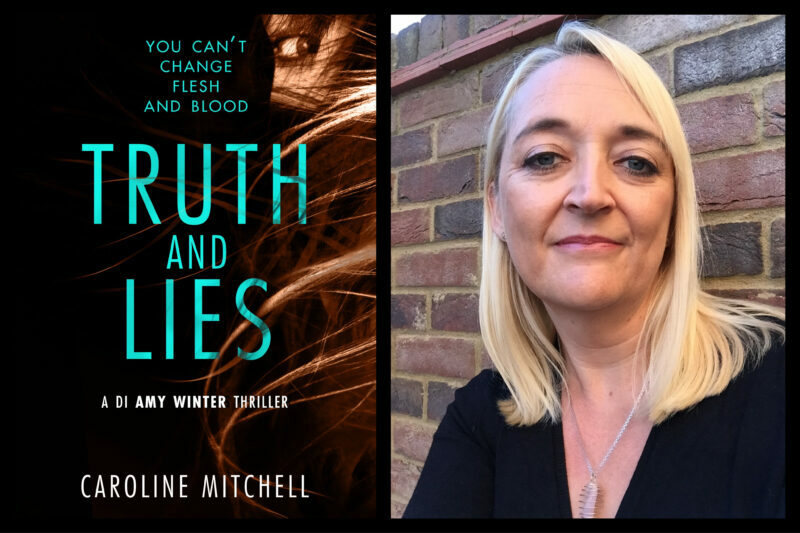 Synopsis:DI Amy Winter is hoping to follow in the footsteps of her highly respected police officer father. But when a letter arrives from the prison cell of Lillian Grimes, one half of a notorious husband-and-wife serial-killer team, it contains a revelation that will tear her life apart. Responsible for a string of heinous killings decades ago, Lillian is pure evil. A psychopathic murderer. And Amy’s biological mother. Now, she is ready to reveal the location of three of her victims—but only if Amy plays along with her twisted game. While her fellow detectives frantically search for a young girl taken from her mother’s doorstep, Amy must confront her own dark past. Haunted by blurred memories of a sister who sacrificed herself to save her, Amy faces a race against time to uncover the missing bodies. But what if, from behind bars, Grimes has been pulling the strings even tighter than Amy thought? And can she overcome her demons to prevent another murder?

Amy Winter is a young detective and she loves her job. She has just lost her father Robert, Chief Inspector of Essex Police, and she had the greatest admiration for him. Her brother Craig works in the Police too. He is a career police officer and he is in good-natured rivalry with Amy.

Robert worked an important case few years ago and because of this he became famous. The case was about the arrest, in 1980’s, of Lilian and Jack Grimes, a diabolical duo who attracted in their home young girls and then they tortured and killed them. Jack died before the trial, instead Lilian had been condemned and she was doing her time. Amy receives a letter right from Lilian. The woman is willing to confess where the bodies of three victims never found are buried. But what she wants in exchange will upset Amy’s life and she will have to deal with her unwieldy past that is suddenly back in the limelight.

Meanwhile Hermione Parker, a fifteen-year-old girl, is kidnapped and her fate appears to bind inexorably with Amy’s choices.

The book begins submitting immediately the story of the cruel couple of seral killer. Their brutal crimes on the one hand are seen through the eyes of press and detectives and on the other they are seen through the life of Poppy, one of the daughters of the diabolic couple. Poppy is a four-years-old baby and she attends what she believes to be the death of her older sister, Sally-Ann.

Her father, in a fit of rage, smashes the head of the young girl with a bottle and the day after he is going to dig a new grave in the garden.

When we read Lilian’s letter that upsets Amy’s life we find out how lives of different protagonistsare entwined.

The devious mind of Lilian hatched a perfect plane, based on feeling, affection, regret and revelations with dropper. But the killer hasn’t dealt with Amy’s temperament. In fact she first makes her flood from feelings but after she find the strength to react and combat Lilian.

Page after page the reader is involved in the personal history of Amy and surprises are not missing, until the final. Nothing is as it seems and the simplest solutions are reversed one after another and a not imagined epilogue is revealed.

Amy’s nature is well defined and so natures of colleagues Dougie and Paddy or her chief Pike or her mother Flora are. Each of them has a specific place in the narrative and each of them has a little piece of truth, a piece that is necessary to arrive at closing the double case.

It’s in the past that we discover the key to hold up Lilian and to find safe and sound Hermione. It’s a past with myriad folds that has left negative effects on the lives of those who had to deal with two serial killer.

Caroline Mitchell: she is a former police detective and now writes full time. She has worked in CID and specialized in roles dealing with the vulnerable victims—high-risk victims of domestic abuse and serious sexual offences. The mental strength shown by the victims of these crimes is a constant source of inspiration to her, and Mitchell combines their tenacity with her knowledge of police procedure to create tense psychological thrillers. Originally from Ireland, she now lives in a pretty village on the coast of Essex with her husband and three children.